President Uhuru Kenyatta at State House, Nairobi, received the 18-carat gold FIFA World Cup trophy from legendary Brazilian footballer Juliano Belleti. President Uhuru Kenyatta on Thursday received the 2022 World Cup trophy at State House, Nairobi. Retired Brazil right-back Juliano Belletti, 45, presented the trophy to the president ahead of public viewing at the Kenyatta International Convention Centre (KICC) in Nairobi on Friday, May 27. Belletti was part of the teams that won the 2002 FIFA World Cup and competed at the 2001 Copa América and 2003 FIFA Confederations Cup. At the club level, he played for Villarreal, Barcelona, Chelsea and Fluminense. After receiving the trophy, which will be in the country for two days, President Kenyatta said: “It is a moment of honour for Kenya as we receive the World Cup for the fourth time, and is an inspiration to our football fraternity.

“On behalf of the people of Kenya, it is an honour to be part of 51 countries [that have been chosen as the World Cup trophy destinations]. President Kenyatta posed for photos and videos while lifting the trophy. The Head of State becomes the first president in Kenya to preside over three public viewings of the trophy – in 2014, 2018 and 2022. The 2022 trophy was first exhibited in Dubai on May 12 and is expected to visit 51 countries and 91 cities across the world. “Former World Cup winners Iker Cassilas [of Spain] and Kaka [of Brazil] came together to send the original FIFA World Cup Trophy on its journey around the world ahead of the tournament later this year,” FIFA said in a statement on May 12. The 2022 World Cup tournament, which features 32 teams, will be held in Qatar.

In the next World Cup tournament (2026), 48 teams will participate in the contest. The World Cup trophy is made of 18-carat gold with bands of malachite on its base. The trophy was made by Stabilimento Artistico Bertoni company in Italy. Kabras Sugar will renew their rivalry with Menengai Oilers at Christie Sevens, the second leg of the National Sevens Series set for Saturday at the RFUEA ground in Nairobi.

Read full article at The Standard

NAIROBI, Kenya, May 26 – As Kenya reels on a current suspension by FIFA from all international football, President Uhuru Kenyatta says he hopes that one day, national football team Harambee Stars can qualify, and probably win the FIFA World Cup. President Kenyatta was speaking on Thursday afternoon at State House Nairobi as he hosted the FIFA World Cup Trophy which arrived earlier in the morning ahead of a two-day 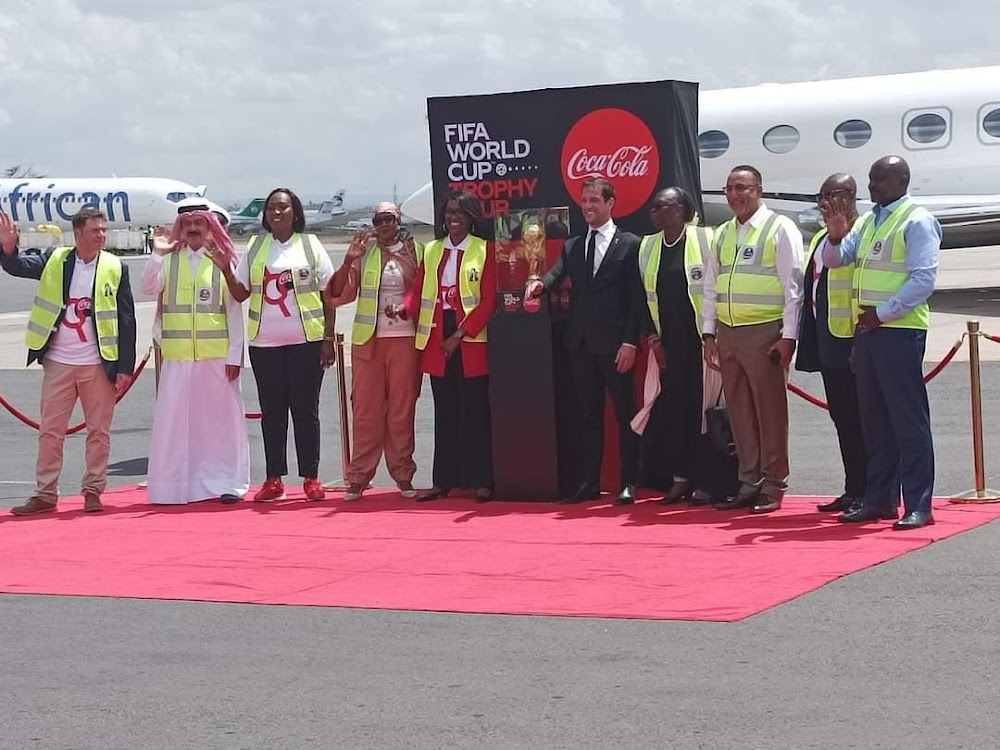 The FIFA World Cup trophy on Thursday landed on Kenyan soil. The most coveted trophy in World football touched down at 12:20 alongside Brazilian football star Julian Belletti. President Uhuru Kenyatta received it in 2013, the second time it was in Kenya. From the Airport, the trophy headed to the State House where President Uhuru is expected to receive it. Football fans will have an opportunity to see the trophy 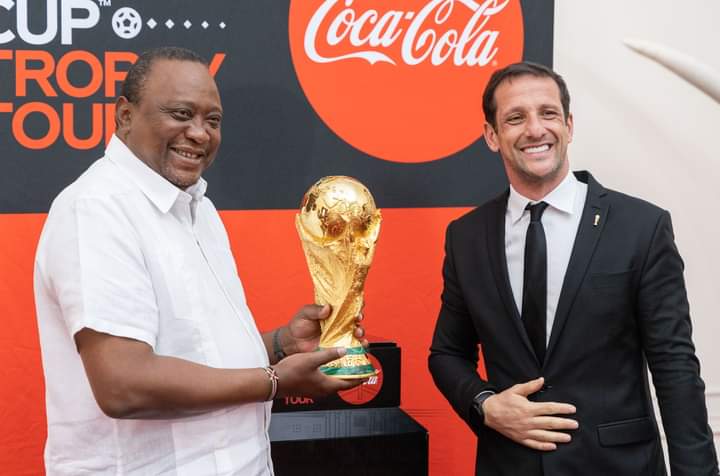 By NATION AFRICA More by this AuthorThe coveted Fifa World Cup trophy has arrived in Kenya for the much-awaited, two-day tour. The trophy is on a world tour ahead of the World Cup to be held in Qatar in November and December. The plane carrying the FIFA World Cup trophy at the Jomo Kenyatta International Airport in Nairobi on May 26, 2022. Kenya has never graced World Cup and the

NAIROBI, Kenya, May 25 – Juliano Belletti, the man who broke Arsenal FC hearts in the 2006 UEFA Champions League final will be in Nairobi on Thursday, accompanying the FIFA World Cup Trophy on its tour to Nairobi as the official ambassador. Belletti won the World Cup with Brazil in 2002 and has been capped 23 times by the Selecao. France’s forward Kylian Mbappe kisses the World Cup trophy after

Nairobi — The prestigious 18-karat gold FIFA World Cup Trophy has landed in Kenya in style on a two-day tour. The trophy accompanied by Brazilian legend Juliano Belletti landed in Nairobi shortly after 12:30pm and was received by Cabinet Secretaries for Sports Amina Mohamed, Trade’s Betty Maina and Najib Balala of Tourism. “We are pleased to receive the original World Cup Trophy and we look forward to an amazing two

NAIROBI, Kenya, May 26 – The prestigious 18-karat gold FIFA World Cup Trophy has landed in Kenya in style on a two-day tour. The trophy accompanied by Brazilian legend Juliano Belletti landed in Nairobi shortly after 12:30pm and was received by Cabinet Secretaries for Sports Amina Mohamed, Trade’s Betty Maina and Najib Balala of Tourism. “We are pleased to receive the original World Cup Trophy and we look forward to

What happens if you win the FIFA Club World Cup?

Is FIFA Club World Cup the same as world Cup?

What is the most expensive trophy in the world?

What is the Club World Cup trophy?

How much is the World Cup trophy replica worth?